Welcome to All the Stars of Pern!

Created by Anne McCaffrey, the planet of Pern is a peaceful place, its denizens spread out across its two great continents. Descended from the original colonizers of the planet, the people of Pern live with limited technology, living in Holds that oversee all manner of craftspeople and their families. Once plagued by pernicious macro-organisms called Thread – which fell from the sky and would devour anything organic in its wake – Pern came to rely on telepathic dragons and their riders, who would fly the skies and scour Thread with fire before it could fall to the ground below. The various Holds would tithe resources and supplies to the Dragonriders in their Weyrs in payment for protecting their people and lands from Thread.

That was all, of course, until Thread was thought to be prevented from ever falling again. Targeting the Red Star – an eccentrically orbiting planet that occasionally came close enough to Pern to drop the dangerous organisms known as Thread – the Dragonriders flew their teleport-capable dragons to the Red Star and caused a series of explosions that shifted the planet in its orbit, sending it on a new path that was thought to remove the threat for good. In the wake of the trailing Red Star, peace returned to Pern and the Dragonriders were no longer needed to protect the people of Pern from Thread.

As a result, hundreds of years -- turns -- have gone by with the Dragonriders turning their attentions to other activities and aspirations. Without Thread to fight – and without tithes from the Holds coming in – the riders took up all manner of odd jobs and professions, working with their dragons to fly search and rescue missions, ferry people and equipment from place to place, and even farm to grow their own food and supply for their other needs. No longer restricted to the dragon Weyrs, the riders spread out on the planet, building their own homes and finding peace in what work they could find or create.

And with the threat of Thread so far removed, the people of Pern moved on. Thread was mostly forgotten; stories to frighten children. Holds stopped tithing long ago and the Dragonriders were all but relegated to irrelevancy. But over the last five decades, the Red Star has seemingly drawn closer and closer back towards Pern. And what was thought to be a myth now proves a deadly threat once again returned. For the last four turns, Thread has been falling once again and the Dragonriders have once more taken to the skies to protect Pern and her people.

With the return of Thread, the need for the various Holds and Weyrs to work together to save the land and its people is more vital than ever. Who will you be and what role will you play in this fight for survival? Are you an esteemed Dragonrider, flying with your telepathically-bonded lifemate to sear the skies clear of Thread? Are you the leader of a Hold, seeing to the daily needs of your people? Or are you, perhaps, a Hold crafter learning to ply your trade as the dragons soar overhead, keeping you safe? The possibilities are endless on All the Stars of Pern! Join now to reserve your spot in this fantasy game based on Anne McCaffrey’s incredibly famous novels.

We are pleased to be the first Pern and so far only Pern sim that has graced Sim Central and are thankful for hosting our little corner of the web and are glad our ten year club is back after a decade hiatus.

Please excuse our dust, we are currently battling Thread as it's been falling for the last four turns. Wander around and if you have any questions or would like to see specific things, please contact a GM. 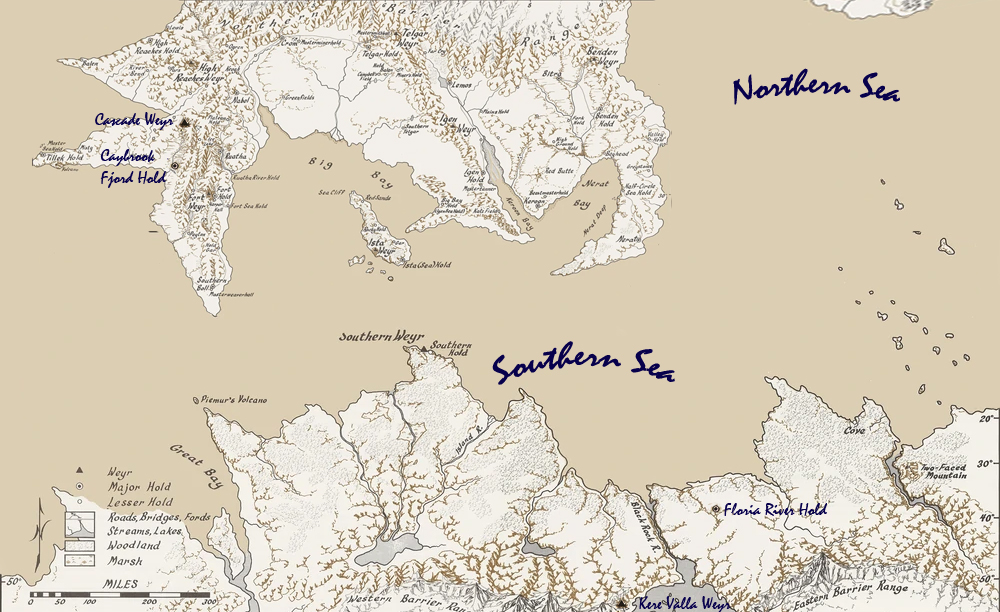 Two days. They had just two days until the first Thread of the month fell. And as gassy, bloated, full-bellied dragons were near useless at fighting Thread, So'l had decided that his wing should get that particular act taken care…

Naela was dressed in her riding furs, even though it was ridiculous hot outside today. The bitter cold of between was something no matter the amount of furs would keep away. **Ready?**

The Gold exhaled a steamy breath even in the hot of day.

Shaking her head, she walked over…

» The Future of Pern

Kenna stood with her face raised to the sun, her eyes closed, a smile on her face. A mild breeze tousled her hair and she revealed in the warmth that permeated her skin.

"Finally," she exhaled. "A warm day after a Turn of horrendous freezing cold."

"Do you want me to send a senior apprentice to help you support the new program you will be implementing here?" Brinda asked the travelling Healer that covered the majority of outlying cotholds of Cay Fjord Hold. Her icy blue eyes bored into the countenance of the older Healer that…

The ink had finally dried on the last entry of Floria River Hold's account book. The Hold once again had a very prosperous month, which meant an incredibly profitable first quarter to the Turn. Everything balanced and that made the Hold Steward very happy. But that happiness quickly dissipated as…